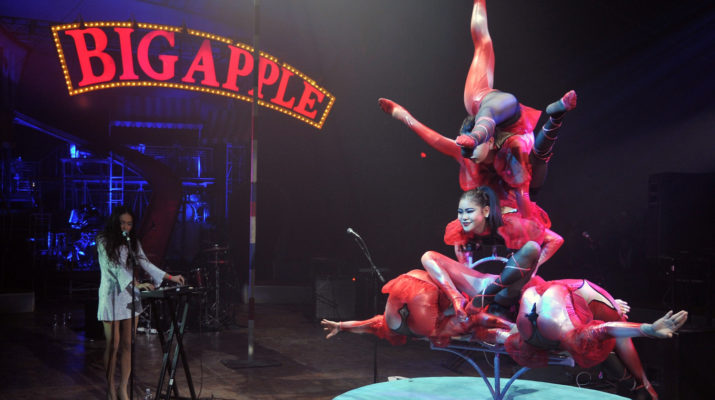 This summer I took my girls to the Big Apple Circus in Queens, New York and it was a night of family fun! Loving to travel as much as I do, I made a commitment to myself that this summer I was going to approach my own “backyard” of Long Island and surrounding areas, with the same passion as I do when I travel, by researching and experiencing all the sights and activities that are happening locally. At the top of my list was The Big Apple Circus. I am not a patron of circuses that exploit and use exotic animals or have them doing unnatural things. But, after doing some research, I was fairly certain that this circus did not fall into that category and was willing to take a chance and see for myself. I was very pleased by what I found on all levels!The Big Apple Circus has been around in New York City since 1977, and I’m ashamed to say, I had never seen it before this past weekend. A great deal has changed in the past 35+ years from its humble beginnings in Battery Park, to headlining at Damrosch Park at Lincoln Center, Manhattan and to traveling all around the United States and abroad. I was so out of touch with this New York-based event, that I was actually shocked to find out that the current location for which I would be purchasing tickets was right here in Queens at Cunningham Park.As a teenager attending high school in Queens, Cunningham Park was a big hang out, so, it was actually a bit exciting to be returning there with my children, many years later, to see a show under the big top!

My first personal encounter with The Big Apple Circus was visiting their website, which is absolutely delightful and engaging. Makes you feel as if you are already at the circus from the site design, video clips featuring some of the performances, and the lively circus music playing. I had no idea of the show schedules and when I decided to buy tickets but was happy to learn that the last performance for this season, here in Queens was June 15th. I didn’t waste any time grabbing four tickets. Otherwise, I would have had to wait for the late fall when the circus returns to Damrosch Park at Lincoln Center.Queens is a great location to see this show as it is centrally located off the Grand Central Parkway and a variety of other main thoroughfares in the surrounding area of Flushing. There is also access to the park from several entrances, with the closest one on the Union Turnpike side of Cunningham Park. Street parking in this residential area is readily available as well. A short walk through the park, leads right to the entranceway of the circus area. Prior to entering the big tent, booths with snacks, beverages and memorabilia are conveniently located. It was raining when we attended, so we made our way inside rather quickly, but not before we grabbed some popcorn! All the staff we encountered were friendly and welcoming and helpful in guiding us to our seats. The Big Apple Circus follows in the tradition of the European style “one ring” circus, with a ring master and performers that include acrobats, jugglers, tight rope walkers, trapeze and more. They also guarantee that no seat is more than fifty feet from the performers. I managed to get fourth row center tickets and the location couldn’t have been more perfect. The tent was well cooled and the seats were comfortable.Just a little background – my kids, seven and ten, were giving me a hard time about going. You would think I was threatening them with a sharp stick in the eye the way they were protesting going to what was supposed to be a fun time. It was very off-putting to me and as we got closer to the time we needed to leave, their attitude was causing me to get more and more angry. Seeing that my patience was wearing thin, they shut up and got in the car. Cut to, sitting inside The Big Apple Circus tent – both girls had smiles from ear to ear and were mesmerized throughout the entire show, from one performance to the next. The setting of our one ring “stage” was a scene from the streets of New York City in this year’s show called Luminocity. Even the musicians were visible as they played both circus music and contemporary pop songs throughout the two hour event.

The ring master opened the show and introduced each new performer that entered the ring. Beginning with an amazing sixteen year old juggler, to a slapstick, silly clown, followed by a short dog and pony (literally) show; one by one, the highly trained acts entertained with their specialty – some more death defying than others. The high wire duo had me and Gianna wide eyed and open mouthed as we watched the couple sing and dance back and forth above our heads. I still get butterflies in my belly thinking about it. I was very pleasantly surprised with the animal acts – the dogs and horses performed individually and together during two acts and looked very much like they were having fun, prancing and running around the ring. All of the performers had such ease and grace with their specialty and it’s no wonder because the origins of The Big Apple Circus actually began as an idea to start a circus school to train circus performers in lower Manhattan.Next season’s show, called Metamorphisis will begin this Fall (after a summer break) in Dulles, Virginia from September 18-October 5 and then back to New York at Lincoln Center from October 17 – January 11, 2015. Tickets are on sale now at their website, along with lots of other information about this big top entertainment gem! 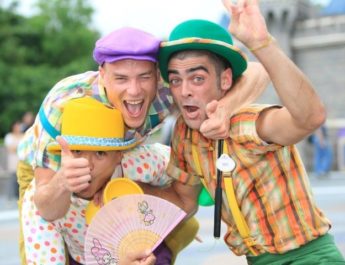 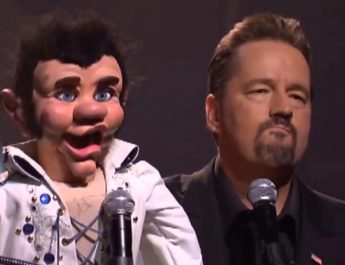 Shari Lewis, One of many Greatest Feminine Ventriloquists of All Time